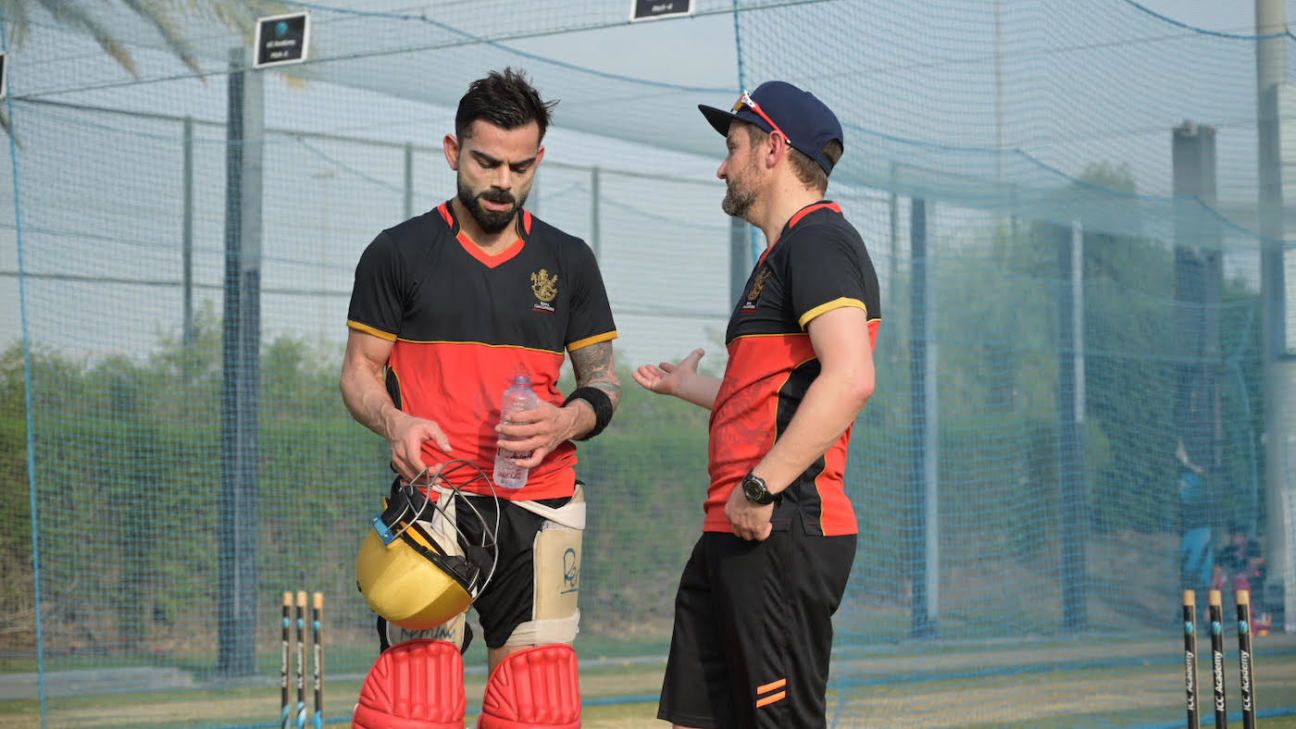 Virat Kohli didn’t miss cricket as much as he thought he might after the Covid-19 pandemic brought the world to a halt, as he returned to the nets for Royal Challengers Bangalore to prepare for IPL 2020. Kohli said that he embraced a break he couldn’t get otherwise before the pandemic.

Kohli has played, on average, at least 40 international matches per calendar year since the start of 2017 and had already played 15 by March this year. Those numbers account for the breaks he has taken to rest, and do not include the IPL games he has also had to play.

“When we had our practice session yesterday, is the time I realised how long it’s been,” Kohli said in Royal Challengers’ Bold Diaries series. “When I was heading to the practice session I felt nervous, felt a bit jittery, but things were okay. Honestly I didn’t miss the game as much as I thought I might. Maybe because I was going for nine-ten years before that and this was the only break I was ever going to get. And that long. But it was a revelation for me. My focus was not solely on how I’m missing the game all the time and just carrying on with life and doing other things.”

ALSO READ: Kohli on his first net session after lockdown

In February this year, Kohli had spoken of the “rigourous” schedule that was coming over the next three years, and said that he had managed to maintain his intensity over the years because of the periodic breaks that he had taken. This time round, with no other choice, and with the opportunity to spend time with his wife who has similarly demanding schedules, Kohli said “just being home” was enjoyable.

“The best thing was Anushka [Sharma] and I were at home. We never got so much time to spend together, since we started seeing each other. This was the longest we got to spend with each other,” Kohli said. “Just being home, being in your own home with the one you love – you couldn’t ask for anything better. We just made the most of that whole time. Created a bit of a routine for ourselves.”

Kohli and Royal Challengers have been in the UAE for over a week now, and have begun work on many fronts, including the team culture and an effort to maintain the mental wellness of their players. It is understood that Royal Challengers are the only franchise travelling with a mental health expert. Alongside all of that, there was also a team call led by Kohli in which he spoke to the younger players about the importance of respecting the biosecure bubble.

“What I said on the zoom call, I don’t think it should be pressure for anyone. The magnitude of the situation is such. We’re all here to eventually play cricket, take care of this tournament, take care of our surroundings that we’re in. The bio-bubble needs to be respected at all times for the tournament to happen,” Kohli said.

“We’re here to play. We’re not here to have fun and roam around and say I want to hang out in Dubai. That is not the time we’re living in. So we have to accept the phase that we’re going through and understand the privilege just to be a part of the IPL. Everyone should accept that and not have desires that make them behave in a manner that is not required.”

Royal Challengers have not been in the playoffs since being runners-up in 2016, and have finished bottom of the table twice since then, including last year. In that period, they’ve also had three head coaches, with Simon Katich being the latest to take on the role. Mike Hesson will be supporting him as Director of Cricket Operations. Kohli said the combination has already made him optimistic about the upcoming season.

“Mike and Simon and Adam [Griffiths, bowling coach] along with the other support staff – they all seem balanced, pretty clear in what they want. At the same time they’re very respectful of the fact that they need to manage people a certain way, but also setting a very clear, very forthright culture in front of them; that this is where you need to go, we’ll help you along the way, but the culture will not change because of individual preferences.

“That is the balance that these guys have created wonderfully till now and I’m sure they’ll keep continuing to do so because they don’t seem like the kind of people who will waver when there’s pressure. They’re firm, they’re clear on where they wanna go and they’ll take the team along. They’re not going to just walk away when things get difficult. That’s the sense I’ve got till now and it’s a good feeling to have people like that.”