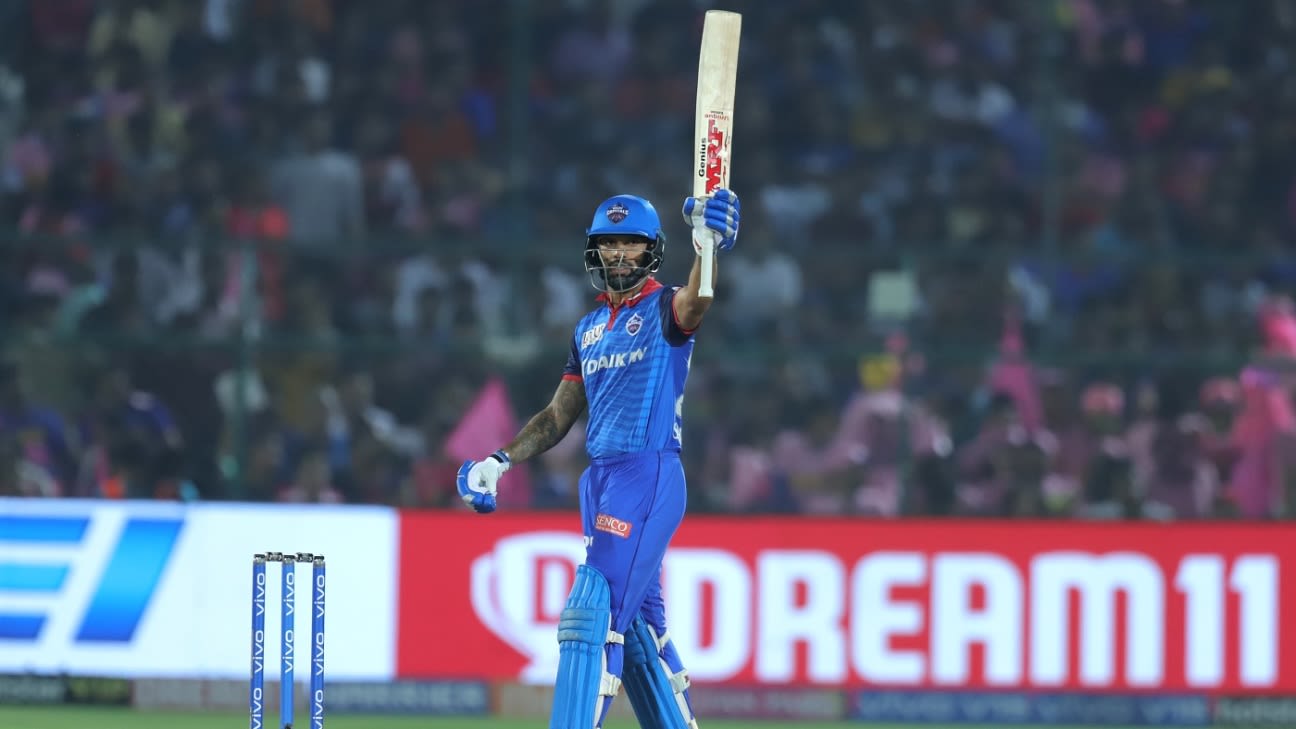 Three venues in the UAE will share the load of hosting 60 IPL matches this season. This, according to the Delhi Capitals opener Shikhar Dhawan, could be a double-edged sword. On the one hand, the players won’t be flying between venues constantly like they do back in India. On the other, they might have to play a lot of matches on worn pitches.

“Because there will be less travel, your body won’t tire as much,” Dhawan said during a media interaction organised by the Capitals. “Usually in the IPL, your match will finish late at night, and then you’ll take a flight at 11 the next morning. Now, all the players will be able to recover better between matches.

“[From a batsman’s point of view], it’ll depend on the pitches. If we get good, true pitches, we’ll make plenty of runs, but it won’t be that easy if the pitches aren’t as good. We’ve not had cricket for all these months, so we’ll have to see how the pitches are prepared, how they are used. By the middle of the tournament, they’ll get used quite a lot [because there are only three venues], so it’s possible they will start turning, or keep low – all these things are possible.”

Tired, used pitches, however, might present the Capitals with an advantage over some of their rivals, given the strength of their spin attack, which has been bolstered by the acquisition of R Ashwin in an out-of-auction trade from Kings XI Punjab.

“I feel that the wickets are going to turn a bit or get slower, because only three grounds are available, and that’s where we’ve got such great spinners in our side,” Dhawan said. “Ashwin has come in, Sandeep [Lamichhane] is there, Amit Mishra is there, Axar [Patel] is there, so we’ve got a very very strong side, and at the same time they bat well, so our batting goes deep, and with their experience, it’s going to be a huge advantage for us.”

On-field challenges apart, the players in this season’s IPL will also need to endure two months inside a bio-secure bubble. Dhawan said players would need to be mentally strong to get through it.

“There are challenges to living within the bubble, because you won’t get to meet new people, you’ll have to remain with the same people throughout. You can’t go to restaurants, you can only go to designated areas. Our team has an entertainment room, where we play TT or video games, so that’s a good thing we’ve been provided, plus we have team dinners.

“Where there are challenges, there are opportunities. I see it as an opportunity to bond with my team-mates and the entire team.”

SHIKHAR DHAWAN ON THE BIO BUBBLE

“Where there are challenges, there are opportunities as well, and it depends on the person and how he views things. I see it as an opportunity to bond with my team-mates and the entire team.

“Secondly, whether a player is doing well or badly, they can’t go out, they’ll have to remain inside [the bubble] and go through those emotions. There won’t be an outlet. You can’t go out and relax and divert your mind. People have to be mentally strong – as I said, it can be a challenge, it can be an opportunity too. I see it as an opportunity – I’m going to explore it and get stronger.”

Beyond the IPL, Dhawan hasn’t given up hope of making a Test comeback. He is a regular for India in white-ball cricket, but he hasn’t played a Test match since September 2018.

Since then, India have used Rohit Sharma, Mayank Agarwal, Prithvi Shaw and KL Rahul as their Test openers, and all four remain above Dhawan in the pecking order for now. That, however, doesn’t discourage Dhawan. He said he was ready to make the best of any opportunity he might get to make his case, and used the example of the century he made for Delhi against Hyderabad in the Ranji Trophy last December – which had also strengthened his claims for an ODI comeback after Rahul had stepped in and scored plenty of runs in Dhawan’s injury-enforced absence.

“I’m not in the Test team now, but that doesn’t mean I’ve given up the desire [to be part of it],” he said. “When I’ve got the chance… like last year when I made a century in the Ranji Trophy, I made a comeback into the one-day team, and if I get a chance, why not?”