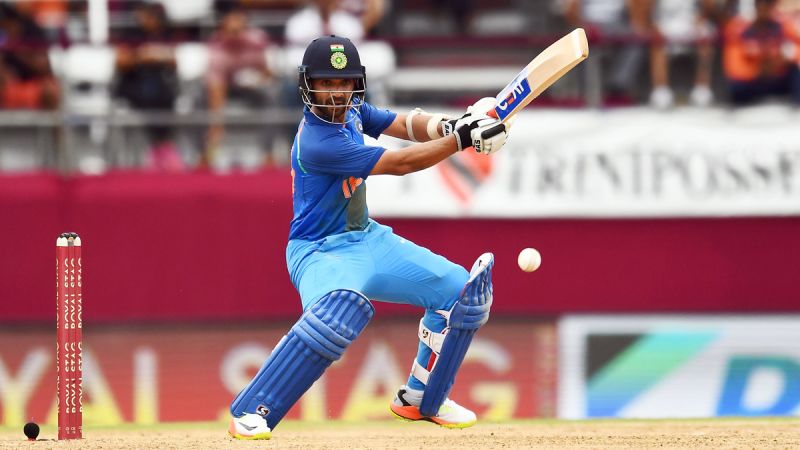 Ajinkya Rahane believes he should have been the No. 4 India were looking for at the 2019 ODI World Cup, a vacancy they failed to fill after trying various players. Rahane last played ODI cricket on the tour of South Africa in 2017-18 when his captain Virat Kohli called him a “strong candidate” for the No. 4 slot in the World Cup in England. Until then Rahane was seen as someone who did well at No. 3 but struggled if he had to start his innings against an older ball and a well-spread field.

Kohli’s lifeline to Rahane – handed out under the impression that middle overs in England would feature more pace bowling than they do in Asia – lasted only one series, in which Rahane scored 140 runs in five innings.

“I was actually thinking I will be there in the World Cup batting at No. 4, but it is gone now,” Rahane said at a virtual press conference. “You cannot think too much about it. My goal, my aim, is to come back into the ODI team, do well in white-ball cricket which I am really confident about. I don’t think too much about it [the World Cup], [but] yes, especially when I was playing county cricket when World Cup was happening…as a player everyone wants to be a part of the World Cup team, especially when you know you have worked really hard, your record in the past was really good.

“But I always think of things I can control as an individual and how can I give my best and learn and get better as a cricketer. Right now my only aim is to do well for Delhi Capitals. And I am sure about my ODI comeback, and I do believe in myself. Not thinking too much about it, but yes at that time I felt that I should be there at No. 4.”

Rahane maintained his record in ODI cricket was good when he was dropped. “If you see my record before getting dropped in ODIs, it was good actually,” he said when asked where he saw his white-ball career going. “People obviously talk about strike rates, people talk about averages; in the two years before getting dropped, my record was really good in 50-overs cricket.

“I am really positive, I believe in myself, and it is all about that. Having that faith in myself rather than what people are saying. Just keep working hard, which I am doing in my career. I have the ability, I have the belief in myself, and I am sure I will be back in white-ball cricket.”

“It is completely up to the team management [at Delhi Capitals] what role they want me to play. If they want me to bat 5 or 6, I will definitely accept it. It will be an opportunity for me as a cricketer to explore something new about my game.”

In the two years before being left out of the India team, starting with the ODI series in Australia, Rahane batted 25 times and averaged 42 with a strike rate a trickle under 80. However, 17 of those innings came at the top of the order. So most of his ODI cricket in those two years came when one of the first-choice openers was missing. He could argue, though, that once identified as a potential No. 4 he didn’t get a long enough run.

Rahane starts his new IPL season with a similar dilemma for his team management. He is best utilised as an opening batsman, but the side is filled with explosive openers: Prithvi Shaw, Shikhar Dhawan, Jason Roy. They even have Shreyas Iyer and Rishabh Pant with first dibs at Nos 3 and 4. Asked if he was asked to take up a finisher’s role, Rahane said he would be game to try it.

“We are still in quarantine. We are still stuck in our rooms as of now,” Rahane said when asked if he knew what role he would be playing for Delhi Capitals. “What role I am going to play I don’t know. We will have to wait and watch. When we start our practice session, then only we will have that communication.

“You know my character. I am always open to whatever the team asks me to do. I always give my best for that particular role. Having said that I always opened throughout my career. I always enjoy opening the batting. It is completely up to the team management what role they want me to play. I will 100% accept that. If they want me to bat 5 or 6, I will definitely accept it. It will be an opportunity for me as a cricketer to explore something new about my game.”

However, the switch is not easy. As many a team has found out, starting an innings in the middle overs is the toughest job in T20 cricket. As Rahane himself said, you have neither the time nor the cushion of field restrictions at the start of the innings. “When opening, you know there are just two fielders outside the ring,” he said. “So you have the freedom to express yourself. Whereas in the middle order – 4, 5, 6 – you have to grind. You know the field is spread. The boundary options are fewer. In 50-overs cricket, still there are only four fielders outside till 40 overs.”

The uncertainty around Covid-19 means the team management has not had the luxury of letting a player know his role well in advance so he can start training for it, but Rahane said five to six intense sessions should be enough for someone to adapt to a new role. Capitals hope they will start training on August 29; their quarantine ends on the 28th with one final Covid-19 test due on that date.